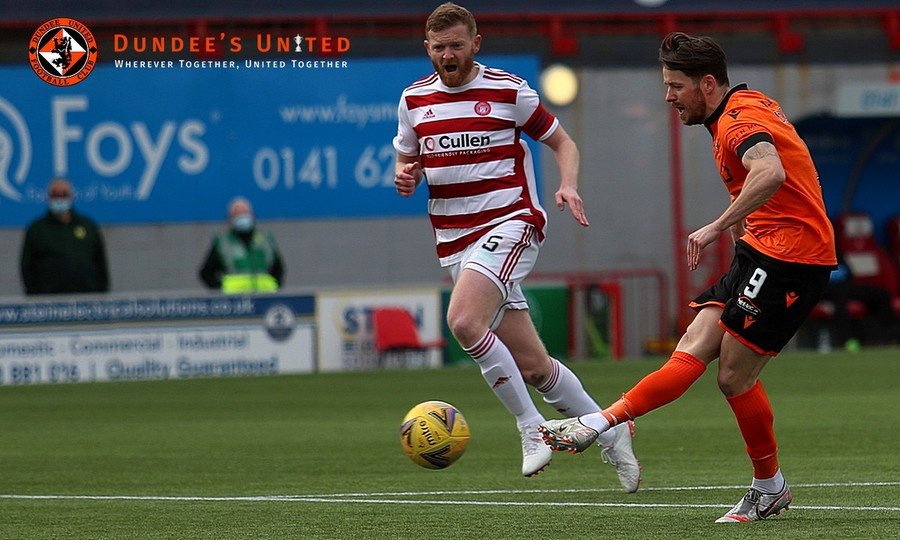 A goal and a clean sheet on the road saw United secure safety away in Hamilton.

A sparkling spring day saw a vibrant bottom six battle on a well-watered plastic pitch. The tangerine Terrors travelled looking to put it up to Saint Mirren in the fight for 7th spot. Hosts Hamilton however were in their late season habitual hammer and tongs fight for Premiership survival. United’s quality and desire up against the Accies’ desperation and need.

The first half more than matched the billing. United looked to press up high, with Shankland, McNulty and Spörle refusing to give the Hamilton backline a moment to think on the ball. Hamilton for their part were happy to direct their balls forward and feed on second balls, set pieces and the undoubted skill of winter signing Bruce Anderson.

The home team came hot out of the blocks and held the early momentum. But it was United that opened the scoring. The Hamilton goalie Gourley looked to clear the ball, under pressure from Shankland, but his clearance was captured by Jeando Fuchs. The midfielder played in McNulty. The loanee carried the ball direct, and slotted it beyond the guilty goalkeeper whose clumsy clearance had created the chance.

The early goal seemed to rock the Accies’ usually indominable spirit. United proceeded to run the show for the next twenty minutes, with slick attacking moves linking play through the midfield. Shankland found himself in excellent positions, and had good chances on goal. Spörle too seemed to enjoy his advanced role, harrying the keeper and striking shots when able. The period of stern pressure yielded no further goals, however, and Hamilton fought their way back in to things.

United’s defence was repeatedly unlocked by a desperate home side. A mix of Siegrist’s strong hands and Hamilton’s lack of precision in striking areas saved the slender lead. Munro had a good opportunity, hitting a shot from the edge of the box that Benji pushed away, before Callaghan failed to convert a volley nearly on the United goal line, chipping the ball just on to the roof of Benji’s net.

The half time break provided Mellon’s men with much needed relief.

Relief lasted only as long as the break however, as Hamilton picked up where they’d left off. The home team’s incessant pressure demanded more stops from the United keeper, adding a few more numbers to his league-high number of saves for the season.

Micky Mellon gave his charges until 57 minutes before making the first batch of four changes. Florent Hoti came on for his United debut, with Clark, Our Academy Graduate Appéré and Pawlett joining him, with Fuchs, Harkes, Shankland and Spörle giving way. This reenergised body of players won back control of the midfield, and the chances began again to fall to the United frontmen. Both Appéré and Clark shot goalwards late into the game, drawing saves from the keeper.

Time ran out on the affair, with Hamilton unable to muster much threat in the closing stages.

The single goal victory makes it two wins and two draws against the Lanarkshire Premiership perennials over the season. More importantly, it guarantees the Terrors safety from relegation, with 10th place being the lowest the Tannadice side can finish this season.