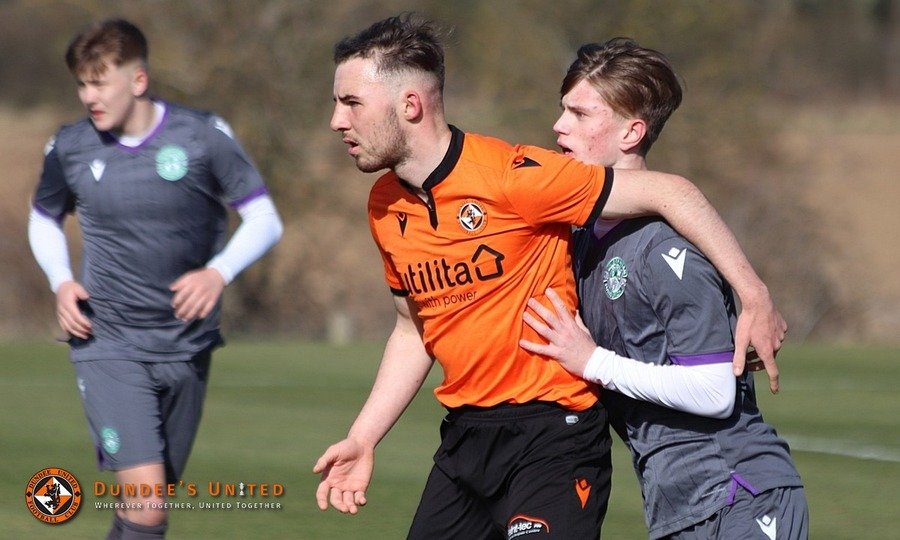 The Under 18s suffered a frustrating defeat away at Hibernian in their opening game of the CAS Under 18 Elite League.

The Young Terrors were left unable to stamp their authority on a match as the hosts ran out 4-0 winners.

The opening goal came midway through the first half when a cheap free-kick was awarded to Hibernian on the right-wing. The ball was floated to the back post and knocked back across goal into the side of the net.

Darren Watson, Finn Malcolm and Lennon Walker led the line for United but were unable to find an equaliser before half time. Watson did manage to use his pace to break through on goal but was flagged for offside, while Malcolm was denied a penalty after being brought down in the box.

Hibernian doubled their advantage shortly after the break when a ball into the box wasn't dealt with properly and bounced off Jacob Comerford's arm, despite the young centre-half knowing very little about it. The referee didn't hesitate to point to the spot and the Hibs striker sent Ruaridh Adams the wrong way to convert.

As the half wore on, the Young Terrors began finding themselves further and further into the opposition half, with Watson's pace proving troublesome for the Hibernian defence and the introduction of Lewis O'Donnell providing more bite in attack.

But another handball would be United's undoing, this time Flynn Duffy handling the ball on the edge of the box and receiving a yellow card. The Hibernian player went direct with the shot and left Adams no chance by sending the ball into the back of the net via the near post.

A second penalty would be awarded to the hosts seven minutes from time after a foul in the box and Adams was again bested by the striker.

Then with just minutes remaining, Duffy received a second yellow card as the Young Terrors ended the match with ten men.

Head of Professional Performance Adam Asghar spoke to DUTV after the match: "It's a freak result these boys haven't turned in before. To lose the game on two penalties and two free-kicks, these are fine details that make it look like an emphatic scoreline but it wasn't that game and you have to go through these experiences as a young player.

"This is one of those days where we have to be calm and look at the long term process, look at what we're trying to build and develop and have faith that we're doing that.

"Losing games is unacceptable at this club and we'll always let the players know that but there has also got to be a little bit of calm after the storm to say 'this has happened for this reason' which we learn from and improve on next week."

Next up for the Young Terrors is a home match against St Mirren on Friday 16th April.