United and Hibs battled out a highly entertaining 2-2 draw in the Scottish Cup at Tannadice. Hibs were twice ahead through Doidge and then Boyle but United showed great battling qualities to level through Shankland in the first half and Appéré after the break.

Following the excellent 4-1 win at Partick last Saturday, Robbie Neilson showed just how strong a squad he has by making five changes to the starting line-up for the tie. Missing were the injured Nicky Clark with Adrián Spörle, Mark Reynolds, Declan Glass and Appéré all dropping to the bench.  The visitors named an experienced side with former United man Scott Allan one of their main threats.

Hibs were the first to threaten after two minutes when Florian Kamberi fired in a shot that beat Benji Siegrist, but Mark Connolly was on the line to block his effort. Five minutes later Hibs did take the lead. A reverse pass from Boyle found Doidge who shot low past the helpless Siegrist. With 12 minutes on the clock United had their first effort on goal when Shankland headed the ball into the feet of Paul Watson who fired over. Hibs then broke forward and the pacy Martin Boyle found Melker Hallberg but the United keeper made a fine save to deny him. Shortly after Lewis Stevenson was booked for a foul on McMullan and then Allan combined with Kamberi whose deflected effort was gathered easily by Siegrist. Ten minutes before the interval Allan and Kamberi were again involved. The former United man set up his team-mate in the box but this time his shot deflected off a United defender and Siegrist managed to save with his right foot. Right on the stroke of half time, United somehow pulled themselves level. Harkes picked the ball up in the Hibs half and slipped it perfectly through to Shankland who showed great composure and finished under the advancing Marciano. 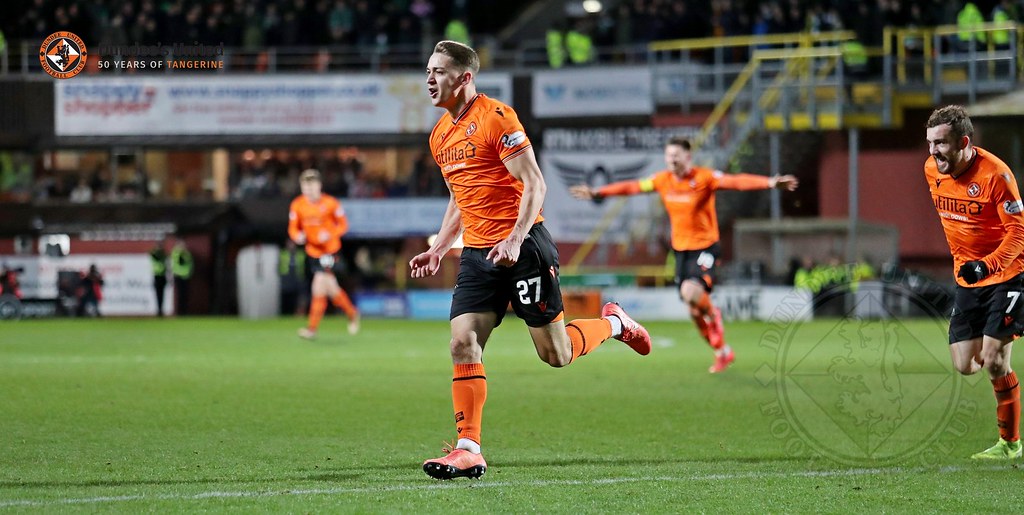 Hibs were forced into a change at the break with David Gray replacing Jason Naismith. United started brightly and Pawlett had a half chance but the defence cleared just before he was able to get his shot in. Two minutes after the restart the Premiership side restored their lead. Kamberi broke forward to set up Boyle who drilled the ball low past Siegrist from 22 yards. Darren McGregor then came on for the injured Ryan Porteous for Hibs. The visitors continued to look the more likely and they had further efforts firstly from a Doidge header and then a long-range shot from Kamberi. Allan was then next to try his luck but his shot flew over the crossbar. Robbie Neilson then made his first change by bringing on Appéré in place of Pawlett. Butcher then picked up United's first booking following a foul on Allan. With 73 minutes gone, United dragged themselves level again this time through a piece of individual brilliance. Appéré cut in from the left before curling a low right-foot shot into the bottom corner via the post. Appéré was really making his mark on the game now and his pass set up Robson who sent in a cross that was well dealt with in the six-yard box. He then broke forward again and curled a similar effort to his goal but this time it was just wide. With ten minutes left Glass came on for United with Harkes making way. Both sides were looking to snatch a winner and Watson did superbly to block a Boyle shot with his head. Hibs almost snatched the victory at the end when the ball was flicked through to Doidge but Siegrist saved well from very close range.

Summing up - this was certainly a test that United haven't faced this season in the Championship. Hibs had periods of dominance but United will take great heart from twice coming from behind to force a replay at Easter Road.

Man of the match - United had a number of good performers but Benji Siegrist has a great game and kept United in the tie with some fine saves.