United’s penalty hoodoo continued as they tumbled out of the Challenge Cup as Arbroath won the shoot-out 4-3  after it had finished goalless.

With so many changes, it was perhaps not surprising that the side weren’t at their fluent best.

But they had enough chances to win this game in  the second half with Arbroath keeper Derek Gaston turning in a Man of the Match performance with three superb saves, not to mention one in the penaty shoot-out.

There were no less than seven changes to the Tangerines’ team which demolished Dundee with only Liam Smith, skipper for the day, plus Peter Pawlett, Jamie Robson and Louis Appéré in the starting line-up. Ian Harkes and Nicky Clark started after finishing the derby.

Apart from an early scare when keeper Deniz Mehmet was put under pressure when he tried to dribble his way out of trouble, the first ten minutes produced little of note.

On 12 minutes, the visitors felt they should have had a penalty when Michael McKenna went down in the box under a challenge from Jamie Robson, playing in central defence.

At the other end a minute later, Ian Harkes was on the end of a Peter Pawlett free-kick but directed his header just over.

We had to wait until the 28th minute for the first shot on target, Harkes curling a 20-yarder straight at Derek Garston from Pawlett’s pass.

Pawlett was booked for a late challenge on Jason Thomson just before a lacklustre half ended. 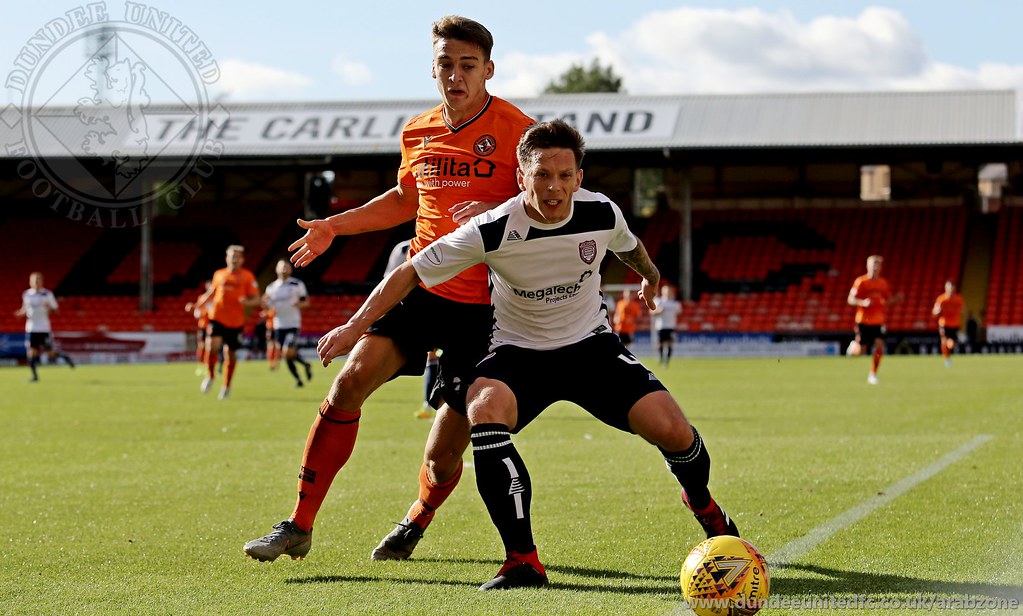 There was greater tempo at the start of the second period and three minutes in a Pawlett pile-driver bounced off Gaston.

The ball was chipped back into the middle by Cammy Smith and an appeal for handball by a Red Lichties’ defender fell on deaf ears.

Appéré was then denied by Gaston diving at his feet when through on goal after 50 minutes and the striker had another chance shortly afterwards, but Gaston saved his angled effort from 8 yards.

Arbroath’s Michael Mckenna picked up the second booking of the game for bringing down Appéré. From the free-kick, Gaston made a terrific one handed save to keep out  Nicky Clark’s effort from 30-yards, and from the ensuing corner, only more Gaston heroics kept out Appéré’s close range header.

Midway through the half, the visitors made a double substitution bring on Bobby Linn and James Murphy.

With 15 minutes to go, substitute Murphy squandered a good opening, firing past when well-placed.

The Angus side came close to preventing penalties by snatching a winner when Greig Spence with a shot on the turn hit the near post at the end of the 90 minutes.

Just before the end of the three minutes of added time, Clark headed over a McMullan corner.

Man of the Match: Not that the defence was under a great deal of pressure but Jamie Robson, playing a different role on the left-side of defence, hardly put a foot wrong to add another string to his growing reputation.