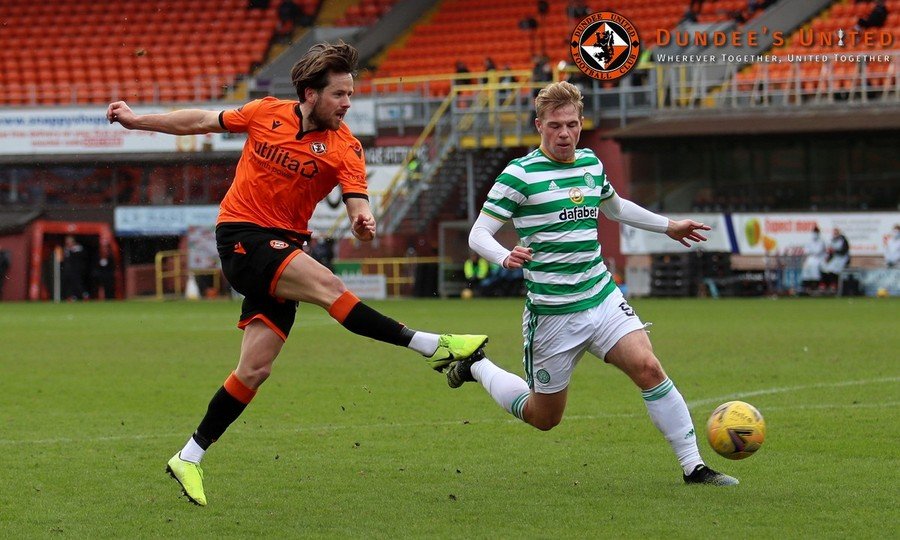 United gain a hard earned point against Celtic at Tannadice in an engrossing encounter that showed United’s work rate at its very best.

United went into the game sitting eighth place in the Premiership. Last weekend’s draw with Kilmarnock at Rugby Park was the side’s eleventh of the season, making United the stalemate specialists in the league. Manager Micky Mellon spoke of his desire to see United take matters into their own hands in their quest for a top six finish, and still be in the hunt by the time they play Aberdeen next in the final encounter before the fixture split.

United made one change to the starting eleven that started last week’s draw with Kilmarnock. Nicky Clark stepped up from the bench to replace Adrián Spörle. The Tangerines featured four Academy Graduate players in the squad.

For his second game in charge, Celtic interim manager John Kennedy made one change from last week’s single goal victory against Aberdeen at Parkhead, Mohamed Elyounoussi replacing Patryk Klimala in the starting eleven.

The visitors started on the front foot and had all the possession in the opening minutes. United’s defenders were kept busy containing Odsonne Edouard, Ryan Christie and David Turnbull in particular. United’s diamond formation in midfield allowed Celtic more space to feed Edouard as the lone striker up front. Elyounoussi continually found space as the extra man in the centre of the park causing United problems.

United’s first chance came on 12 minutes when a loose Stephen Welsh header was met by the oncoming Harkes. Though his shot was well struck, it was held easily by Bain. Some respite for the United defenders.

Celtic continued to dominate and United’s defence and midfield was kept busy. Despite the bulk of the possession, Benji Siegrist had been kept fairly quiet in the United goal. One save from an Edouard shot was all that Celtic’s dominance produced.

With five minutes of the first half left, a thunderous Turnbull shot from 25 yards was expertly tipped over by Siegrist with the kind of goalkeeping that has made him the Premiership’s top shot-stopper with the greatest number of saves.

The visitors continued their dominance at the start of the second period and were unlucky not to go ahead five minutes after the re-start when a Jonjoe Kenny header was blocked on the line by Siegrist, the Swiss keeper’s knees coming to the rescue. Five minutes later and Christie was the next to be denied when Siegrist saved his effort. It was one-way traffic but United’s defence and, Siegrist in particular, kept the reigning Champions at bay.

United just couldn’t get the ball out of their own half and Marc McNulty and Lawrence Shankland were constantly back helping out their team-mates. With two thirds of the game gone, it was a case of whether United could hold on or would Celtic finally pick a hole in United’s resolute defence.

McNulty almost broke through for United in the seventieth minute. Finding space, his curled shot was tipped over by Bain. A reminder to the visitors that they wouldn’t have it all their own way. United were having more possession after the introduction of Pawlett, returning after his three match suspension.

United were relying on counter-attacks with Celtic being so far forward with Our Academy Graduate substitute Appere, on for McNulty, working hard at creating opportunities. United’s second half was certainly creating more chances for them than the first.  Fellow Academy Graduate Chalmers, also on as a sub, was unlucky with five minutes remaining when his stabbed shot was straight at Bain after good build up play by Shankland.

The statistics would show that the visitors had over thirty attempts at goal, but United’s work rate was ultimately the defining part of today’s game. Well organised, great defending and a never say die attitude gave United their hardest earned point of the season as the game finished goalless.

Manager Micky Mellon can be proud of the desire shown by his team to give everything they had at stopping the relentless attacks. The discipline in keeping their shape under such pressure was exemplary. United now have two weeks before they play Aberdeen, back at Tannadice and will be looking to capitalise on today’s performance.