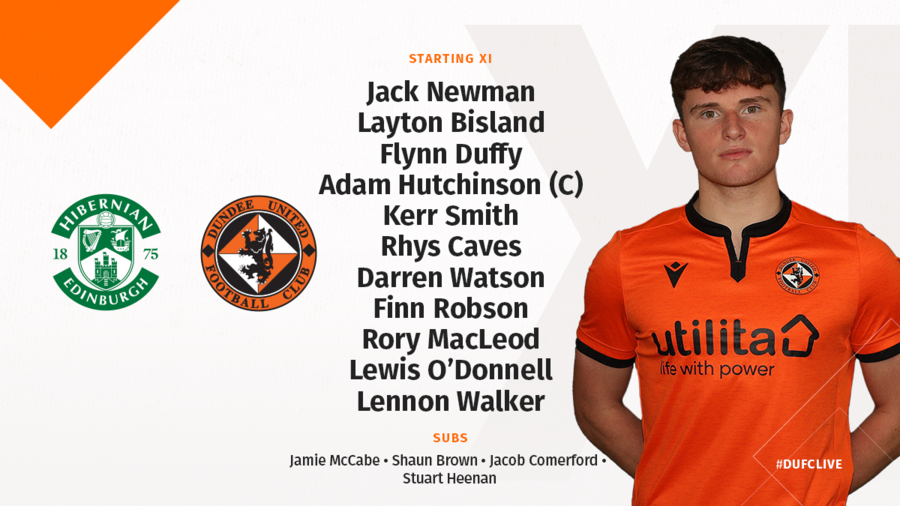 The Young Terrors built on last week's derby triumph over Dundee to make it back-to-back wins when they put Hibernian to the sword in a 3-2 victory away at Tranent.

The 18s made just two changes from the derby match, with Lewis O'Donnell and 14-year-old Rory MacLeod, making his debut at this level, coming into the starting eleven.

United took the game to the hosts straight from kick-off and MacLeod could've made it a debut to remember inside the opening minutes when he put his header wide.

A nice passing move from the 18s saw Layton Bisland charging into the box, but he pulled his shot over the bar, and Darren Watson was played in 1v1 with the keeper, but the defender managed to recover and trackback to turn the ball out for a corner. Lennon Walker was also twice played in behind, but was unable to find the target.

But the Young Terrors did eventually make their dominance count through captain Adam Hutchinson. After bringing the ball under control, the defender stepped into midfield and played a 1-2 with MacLeod to get into the box before slotting home an excellent finish.

United kept the tempo going in the second half and it wasn't long before they'd doubled their advantage. Summer signing Jack Newman launched a quick counter with a throw to Watson. The striker slipped the ball out wide to Rhys Caves who picked out MacLeod with an excellent cross and the debutant completed the move with a low left-foot finish six-yards out.

The youngsters were dealt a blow, however, when Hibs scored against the run of play. From a setpiece, the second ball dropped to a green and white shirt who slammed home from close range.

Then, out of nowhere, the game was level when the referee pointed to the spot after Newman was penalised for knocking over the Hibernian striker despite being in possession of the ball. United's protests fell on deaf ears though and Hibs dispatched the equaliser.

But the Young Terrors rallied together and continued their dominance of the game to eventually net the deserved winner. A mazy run from 15-year-old Stuart Heenan looked like a brilliant assist when he picked out Walker in the box, but the midfielder's shot was saved, but Watson was on hand to tap home the rebound.