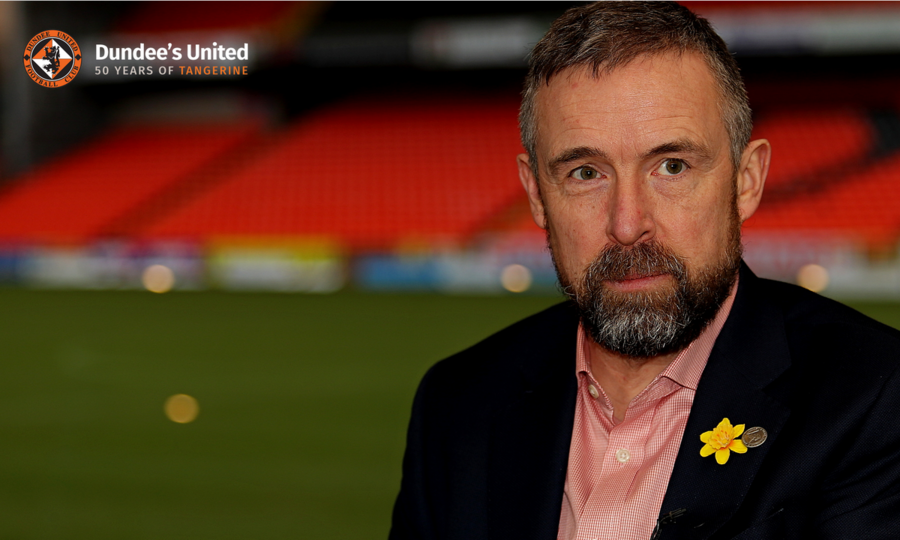 It has been a drastic first week of changes at Dundee United Football Club as we look to help combat the spread of coronavirus.

All players and staff are now, where possible, working from home, with the first team and academy players on specific programmes which they can work on to ensure they are in a strong position to return to training, whenever that may be.

Earlier in the week, Mal Brannigan spoke to the Club's media team to give an update to supporters about where we are at the moment and what we are looking to do moving forward.

"I think we’ve got to the point where we’ve had enough guidance to shape what we think is going to happen in the next few months," said United's Managing Director.

"First and foremost, the most important thing for us is to make sure our supporters, our staff and our players, everyone connected to the Club is being looked after - their welfare is really important to us.

"We’ve gone through that process. We’ve done a lot of internal work with staff and now we’ve worked on a number of initiatives such as working from home, making staff and resources available so that can happen.

"We’ve also looked at staff who are in the vulnerable category and making sure everyone is ok there. Now, we’re trying to communicate with everybody externally to say how we’re working going forward as an organisation."

Of course, as a football club, there have been concerns raised amongst the footballing community regarding what will happen with the rest of the season.

With UEFA confirming at the beginning of the week that the European Championships have been postponed until the summer of 2021, it allows a further two-month window for the season to be postponed back to.

However, this is a continually altering situation and there are no guarantees that those months will be enough. This has lead to suggestions of the league being scrapped and made null and void or having the season end now and the current placement of teams is where they finish the season, which in United's scenario would register us as champions.

It's not a decision which will be taken lightly by the authorities when the time comes, but Brannigan was keen to establish exactly where United stand on the matter.

"My opinion, and that of the board, would be that we would like to see the season through. I know the statement that has come through from UEFA very much gives us a bit of clear run as regards getting the league campaign finished," he said.

"We can see the (Euro) 2020s will be held in 2021 and we're not quite sure yet what is going to happen with the UEFA competitions, the Champions League and Europa League. I think the most important thing is that the national leagues be completed.

"We are top, and we have been top since day one. We are 14 points clear and we are there on merit. We would like to see the season through and if we are still there by the end of the season then we have deserved to be promoted.

"It is much more important to us as an organisation to have that delivered because of what we have achieved rather than by default. That's one of the other options being discussed, more by fans I think than the football authorities.

"The football authorities have a big job on their hands. They have a number of issues to look at and an enormous amount of intricacies to tie up. The current situation with the virus is that nobody is quite sure where we can be from one day to another.

“Our news could change tomorrow, but I think it’s very important that everybody is communicated to as much as we possibly can throughout that whole process.

“A really small chance of it (the season) being null and void - I can't see that happening. If the current positions we're allowed to stand I wouldn't like that either. I think there has to be that view that the season has to play out.

"If that has to be behind closed doors, and we’ve got other stakeholders involved there. We got the players, SPFL and SFA all deciding that at the same time. If that is the only option that we have for us to win the Championship on merit then I would like to see that."

A lot of time, money and effort has gone into the season so far by everyone associated with Dundee United, especially our fans and United's Managing Director wanted to ensure them that we will try and continue to deliver everything we can for them.

“We have to be mindful of the investment that has been put in this year by the owners, Mark and Scott Ogren, the staff, the players and, most importantly, the supporters," he said.

“What we would say to our fans is be patient and be safe. We feel as though we’re going in the right direction. There is a little bit of clarity coming from other authorities rather than just the footballing authorities.

“The government have a particularly tough job at the moment. Different countries are at different moments in regard to the virus.

Dundee United would like to thank our fans for their understanding during this time. We will update you on any information as and when we get it. Stay safe.