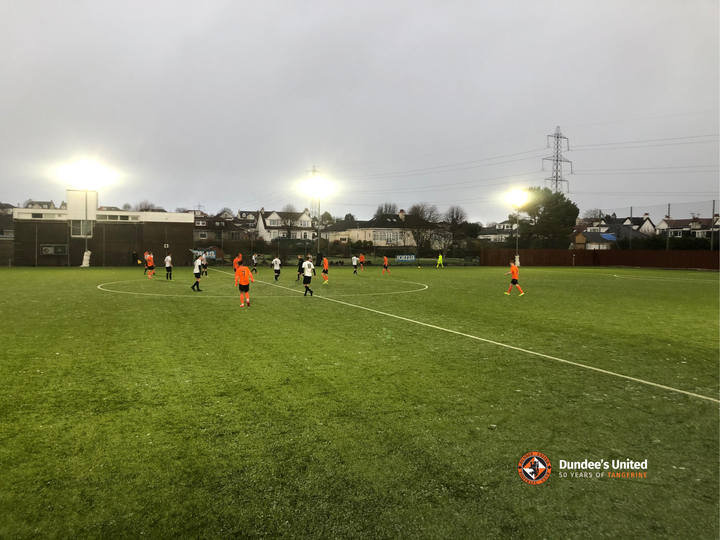 As bad weather continues to batter the country, the Reserves braved the conditions as they travelled to Paisley to take on St Mirren but, ultimately, fell to a 2-1 defeat.

Logan Chalmers struck early in the second half to cancel out Joshua Jack's first half opener, but Cameron Breadner tapped home with 20 minutes remaining to seal the points for the Buddies.

Travelling down the A9, you'd have been forgiven for believing the match would be called off due to the snow and high winds. But as the team bus pulled into the Ralston Training Ground, the skies cleared and kick-off went ahead as planned.

With the wind behind them, United started strong as the attackers put the Saints backline under intense scrutiny with a combination of pace and skill.

Chalmers went close after just six minutes when he latched on to a long ball from Kieran Freeman to break down the left-wing. Full of confidence, he opted to go for goal himself but pulled his shot over the bar.

The hosts went close to going in front in the 15th minute, courtesy of an assist from the wind. Jay Henderson's clipped cross into the box became a shot as it caught Josh Donaldson off guard, but the ball bounced off the woodwork before being collected by the young United stopper.

The Buddies would take the lead 14 minutes later in their first moment of quality from the first half. Lewis Jamieson picked out Jack with a delicate ball into the box and the striker slotted home a low finish.

United could have found themselves level at the break after some fine work from the trialist on the wing. He managed to get the ball past the full-back, who had been keeping him pressed into the corner, and picked out Declan Glass with a low cross. The 19-year-old lined up the shot and struck with power, but saw the ball clip the bar on its way over.

Two minutes after the restart, United finally had their equaliser as St Mirren failed to deal with a set-piece. Adam Hutchinson nodded the ball down to Chalmers, who then dummied it round the defender before firing into the bottom corner.

The conditions worsened from there and neither side were able to get the ball on the deck and play with real quality with the best chance not coming until the 71st minute.

Looking to add his second of the match, Jack tried his luck from 25 yards out but Donaldson parried it to his side where Breadner was lurking to tap home the rebound, with United players and staff furious that he wasn't flagged for offside.

With ten minutes remaining, the trialist thought he had snatched an equaliser for United when he was released down the wing by Chalmers. He proceeded to cut inside and looked to place the ball in the bottom corner, but Saints keeper Peter Urminksy produced a fingertip save to turn it wide of the post and confirm the win.

Player Transition Coach Dave Bowman said: "A couple of weeks ago we got beat quite heavily by St Mirren in the 18s and a lot of our boys today would have played in that match. They probably had a stronger team today.

"I thought our boys equipped themselves well and I'm disappointed for them because they deserved to get something out the game. They get a goal which everyone is adamant is offside, but the linesman doesn't put his flag up so we've just got to bear with it."

Highlights and full reactions from Bowman and Nathan Cooney are available now.

Next up for the Reserves is a match against Morton on Tuesday 18 February. It's a 1:00pm kick-off at Whitton Park.