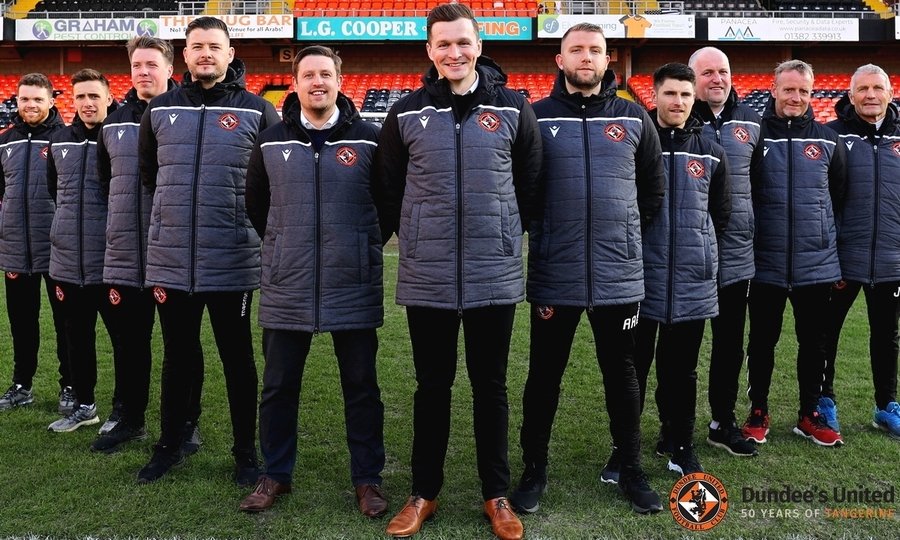 Following on from a remarkable 2019 which saw Dundee United achieve Elite Academy Status, Andy Goldie, the Club's Academy Director, today took the opportunity to present his full-time members of staff.

"To bring success back to this Club through our own players we need the right people. We've identified some really good staff within the Academy," he said.

"When it came to recruiting the new members of staff we decided to do things a bit differently. They are not your typical football guys, meaning we've got a varied skillset within the Academy.

"I wanted staff who had an educational experience, who went on to study in higher education. We've now got people who have come from a psychological background as well as a technical football background.

"We wanted people who could challenge me and the way I think because that is the only way we are going to move forward. We have the one vision, but it can't be one person deciding what that vision is. We need input from different areas to drive us forward again.

"We've got the infrastructure there to support our players and achieving what their objectives are and what our vision is. It's now time to go and produce."

Interviews with each of the Academy staff are available here.

Michael has previously been employed by SportScotland and the Scottish FA having graduated from Abertay University with BSc (Hons) Sports Coaching & Development in 2007. He has also been an Academy coach at the Club since 2018. Michael leads of all administrative and operational aspects of the Academy including Child Wellbeing & Protection, logistical planning for fixtures, ensuring Club Academy Scotland criteria is met for training and games and leading on the Additional Games Programme which has provided our young players with opportunities to test themselves against opposition from South America, Eastern Europe, England and Ireland throughout 2019

Adam joined the Club having worked closely with Academy Director Andy Goldie within the Scottish FA Performance School programme having previously played professionally for Alloa and Dumbarton in the Scottish Championship. He now heads our full-time Academy programme at the High Performance Centre, St Andrews University, as the lead coach with current Under 18 player Chris Mochrie breaking into the first team and Lewis Neilson, Archie Meekison and Nathan Cooney as substitutes.

Club legend Dave Bowman has now been at the Club for an accumulative total of 28 years as a player and in various roles as a member of staff. He is now in the role of Player Transition Coach to help facilitate the progress of our Academy Graduates from Under 18s into the First Team including assisting Adam Asghar with the Under 18s, leading the Reserve Squad on match days and fulfilling the role as a player mentor off the pitch where he passes on his years of experience to our young players.

Thomas, or Tam as he’s more commonly known, joins the Academy having gained a wealth and variation of experiences in football, change management, leadership development and corporate service. He left Kelty Hearts having won two Superleague titles and with the club top of the Lowland League. Now he leads the implementation of our Tactical Performance Programme across the Academy to develop game intelligence, awareness, decision making and our game model alongside the Academy coaches.

Andy has now been with the Club for seventeen years having spent his childhood as an Academy player and the past ten years as an Academy Coach. He left his role with the Scottish FA as Club Development Officer in October last year to lead the Technical Performance Programme across the Academy with the objective of developing technically proficient players who can outplay their opponents individually and collectively regardless of the situation.

Stuart returns to the Club having previously had spells both as a player and First Team Goalkeeping Coach. Having left Falkirk FC in a similar role last year, he now heads up the Academy Goalkeeping Programme delivering individual-specific training and education to develop future number ones for the Club.

Ewan joins the Club from Heart of Midlothian Academy and Oriam having graduated from Heriot Watt University with a MSc Strength & Conditioning. Ewan now leads the Physical Performance Programme from Under 11-18s with his coaches at both the High Performance Centre and Regional Performance Centre with the objective of developing physically robust players who can meet the demands of our game model and the future game.

Jordan, a former Academy Graduate himself, rejoined the Club in March 2019 to rebuild and transform our Talent ID & Recruitment Strategy across Dundee and the surrounding areas. Having played professionally for the Club as well as spells Airdrie, Dunfermline (alongside our own Lawrence Shankland), Queen's Park, Limerick and Bangkok FC, Jordan worked in recruitment in both Scotland and England before returning to the Club. Jordan has revitalised our scouting network with sixteen Regional Academy Scouts now covering Glasgow to Aberdeen and has built strong relationships with boys clubs across the country who feed players into the Academy.

Aaron is our most recent recruit and completes the full-time Academy staffing structure. Having previously worked in similar roles at both Edinburgh City and Hibs Academy, Aaron graduated from Edinburgh Napier University in BSc (Hons) Sports and Exercise Science and also runs his own Performance Coaching business. Aaron comes into the Academy to lead the Performance & Data Analysis Programme including recording, cutting and presentation of individual and team clips from training and games as well as the collection and analysis of individual and game model-specific data to drive performance within the Academy.

Having enjoyed a successful career with Newcastle United, Sunderland and Manchester City, Jeff joined the Club seventeen years ago as First Team Physiotherapist and now leads the Academy Physiotherapy Programme including Under 18s training and match days at the High Performance Centre as well as the treatment and rehabilitation of the U11-16 players.