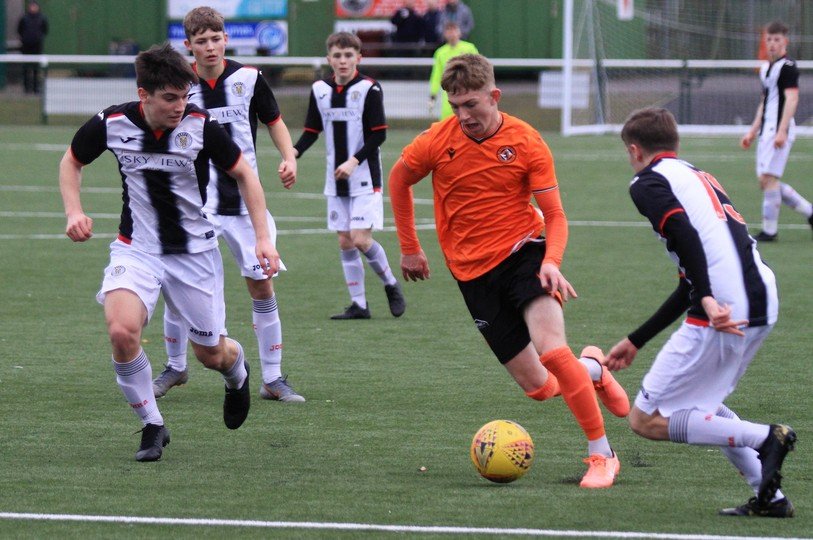 This afternoon the Under-18s experienced the dark side of football when they suffered a heavy 5-1 defeat to St Mirren at Whitton Park.

Archie Meekison got the only consolation for the Young Terrors as four goals from winger Lewis Jamieson and a fifth from Calum Johnson saw the visitors leave comfortably with the points.

United stopper Fraser Currid was called into action in the 13th minute as Jamieson fired his first warning shot after cutting the ball on to his left foot, but he was denied as the 17-year-old keeper tipped it on to the crossbar.

The Young Terrors went close seven minutes later from a corner when Flynn Duffy picked out Adam Hutchinson on the six-yard line, but the 16-year-old centre back nodded high over the target.

There was then a big let-off for United in the 28th minute after being hit on a quick counter-attack by St Mirren. It resulted in Kieran Offord receiving the ball five-yards from goal, but he struck the woodwork.

Disaster struck six minutes from the interval when Saints were awarded a penalty after the ball struck a United arm in the box. Jamieson stepped up and chipped the ball down the middle of the goal to register his first of the afternoon.

The Young Terrors started the second half strongly when in the 47th minute Lennon Walker was played in behind the opposition defence by Finn Robson, but he fired his shot wide across the face of goal.

But two minutes later St Mirren doubled their lead from a set-piece as Johnson nodded the ball down out of the reach of Currid's outstretched arm.

United looked like they'd found a way back into the match when Meekison was brought down in the box and the referee pointed to the spot. The young attacker stepped up for the spot-kick that he had won and sent the keeper the wrong way.

But the visitors responded quickly when Jamieson picked the ball up at the back post and rattled his shot home.

The Young Terrors almost pulled a goal back in the 63rd minute when Meekison fought past the full-back to break into the box. He slipped the ball to Darren Watson but his first-time finish was blocked by the last defender.

But Jamieson stopped any thoughts of a comeback two minutes later when he placed the ball in the bottom corner from just inside the box.

He then added his fourth in the 75th minute after bursting into the box and producing a fine piece of skill before finishing the move.

"That performance was unexpected," admitted Head Professional Performance Coach Adam Asghar. "For whatever reason, the boys never got into any rhythm of the game.

"Credit to St Mirren for their first-half performance they pressed us high and for us, just naivety crept in. We kept playing into pressure, not recognising a solution and as much as the coaching staff can give that, the players have got to be accountable on the pitch to try and solve that problem. It didn't happen in the first half.

"Straight away in the second half, after trying to go through some of their problems and give the players some advice, we lose a goal from a set-piece which is poor.

"We get a penalty to get back in the game and just never kicked on. The worrying thing was the acceptance after goal three and goal four because I believe the game could have still opened up but after that St Mirren just cruised to victory. So, we need to find out why that happened."

Next up for the Young Terrors is a trip to Rangers on Friday 7 February. Kick-off and location to be confirmed.