YOUNG TERRORS OPEN 2020 WITH A BANG 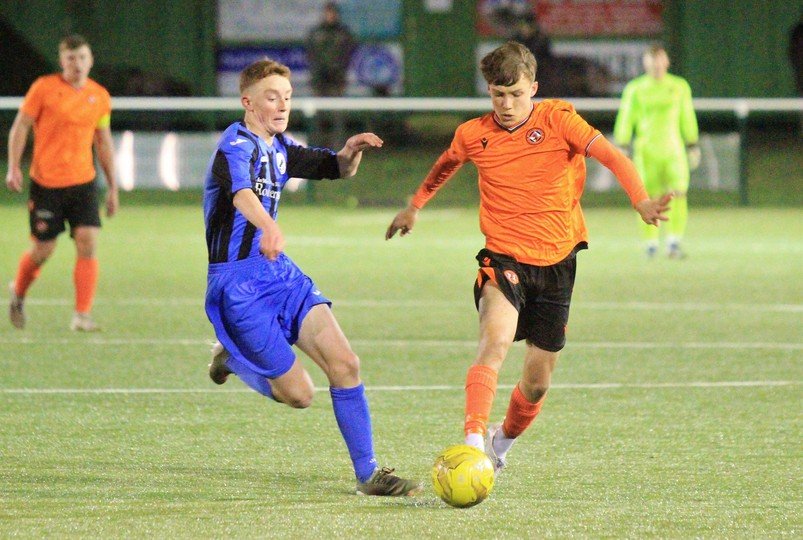 We might be a few weeks into the New Year already, but the Under-18s have only just got back to competitive action as they ran out a 2-0 victory over Fife Elite at Whitton Park to start 2020 off on the right foot.

The first half did leave a lot to be desired, but a remarkable display in the second 45 minutes saw the Young Terrors walk away with all three points thanks to goals from Adam Hutchinson and Darren Watson.

Having spent the last two weeks at a training camp in Alacante, United nearly got off to the perfect start when, after just three minutes, Watson bullied the defender off the ball and burst into Fife's box. Unfortunately, he was closed down to a tight angle and rolled his shot across the face of goal.

The young striker was at it again eleven minutes later when he latched on to a poor header inside the box but again saw his low shot roll inches past the far post.

United's best chance off the first half came in the 27th minute when Shaun Brown played an excellent in-swinging cross to the back post where Archie Meekison was lurking, but the young playmaker failed to get any sort of contact which would have surely seen the ball across the line.

The boys were kicked into life in the second half and after two minutes nearly went in front through Finn Robson after Archie Meekison set him up on the edge of the box, but his low shot was gathered by the keeper.

Less than ten minutes later Fin Malcolm missed a glorious chance to fire the Young Terrors in front. An excellent delivery from right-back Nathan Conney found the striker in the six-yard box, but his effort cleared the crossbar by an inch.

Then on the hour mark, it was goalkeeper Fraser Currid who came to United's recuse to prevent a disaster. Aiden McLaughlen was given too much space to lineup a shot from 20 yards out, but United's young keeper did brilliantly to palm it away from danger.

Two minutes later, Conney had a chance to break the deadlock when substitute Lennon Walker's corner fell to him at the back post. After keeping the ball under control with his chest he then fired the ball wide of the top corner.

United, eventually, did get the breakthrough in the 67th minute. Following a short corner, Archie Meekison curled an excellent delivery into the middle of the box where Hutchinson had risen highest. The defender nodded the ball down into the ground, giving Fife's keeper no chance of keeping it out and wheeled away in celebration.

A second goal was going to be needed to put the game to bed and Watson's strike in the 78th minute was worthy of winning any match. After cutting on to his right foot to ease past the defender, the young strike unleashed a beautiful curling shot into the top corner.

The final ten minutes was just chance-after-chance for United. First, Walker was released into acres of space by Meekison but he pulled his shot narrowly wide of the post.

Then, Walker turned architect as he cushioned the ball at the back post into the path of Kai Fotheringham, who was denied a goal on his comeback from injury when the keeper pushed his half volley wide.

The final chance came in the 88nd minute as Watson took a brilliant touch to round the defender and burst through on goal but, again, his shot found itself on the wrong side of the post.

The Young Terrors, thankfully, wouldn't come to rue these missed chances and got the second half of their season off to the perfect start.

Head Professional Performance Coach Adam Asghar said: "It was a frustrating first half and the players were let known that certain standards weren't met in the first half to play for Dundee United.

"To be fair to the players second half was a totally dominating performance, a lot to be pleased with, 2-0 probably flatters the opposition.

"We had a lot of chances, we were dogged and had a better attitude towards the game. So, pleased with the second half but frustrated with the first half."