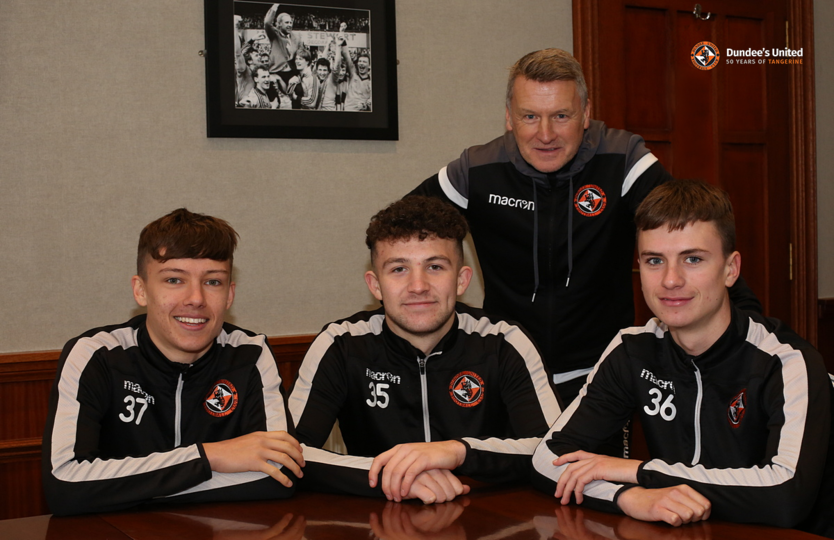 Three Young Terrors have secured extended contracts with the Club.

17-year-olds Archie Meekison, Nathan Cooney and Lewis Fraser all put pen to paper this week. Nathan and Lewis have signed until the summer of 2021 and Archie has penned a deal until summer of 2022.

Nathan, a right-sided defender, has featured regularly for the Reserves and has made the first team bench on two occasions already this season.

Central midfielder Lewis has matured this season and captains the Under 18s currently. He has regularly trained with the first team as his development grows.

Archie, an attacking midfielder, has been a top performer for the Under 18s and has also featured on the bench for the first team. He was named the SEAT Academy player of the month for October.

All three players will continue development under the guidance of Head of Pathway and Loans Brian Grant.

Brian said, "The three lads have developed a good bit in the past twelve months.

"Nathan came into the Club and, to be honest, found it difficult at the start. With the help of the coaching staff and the facilities at the HPC, he has improved in every aspect of his game and fully deserves the contract extension.

"Things didn't start great for Lewis under the new structure and, for a while, I think he struggled to show his ability level. He is someone I have watched come through the Academy at the various age groups, and I am delighted that he has matured and developed lately. He is now the Under 18s captain and understands the demands of being a footballer.

"Injury prevented anyone from seeing the best of Archie at the start of 2019 but, after a slow start, he is now a top performer within the Under 18s and is scoring goals and creating. He deservedly won the Academy's October Player of the Month award within the Club."

"All three players know this is a reward for their efforts so far. Ultimately, we want to see them play for the first team, get 50 to 100 games under their belts and then further their careers with a big-money move. To do so, they need to keep learning from the players and coaches around them each day, and within the individual progression plans we have for each of them."