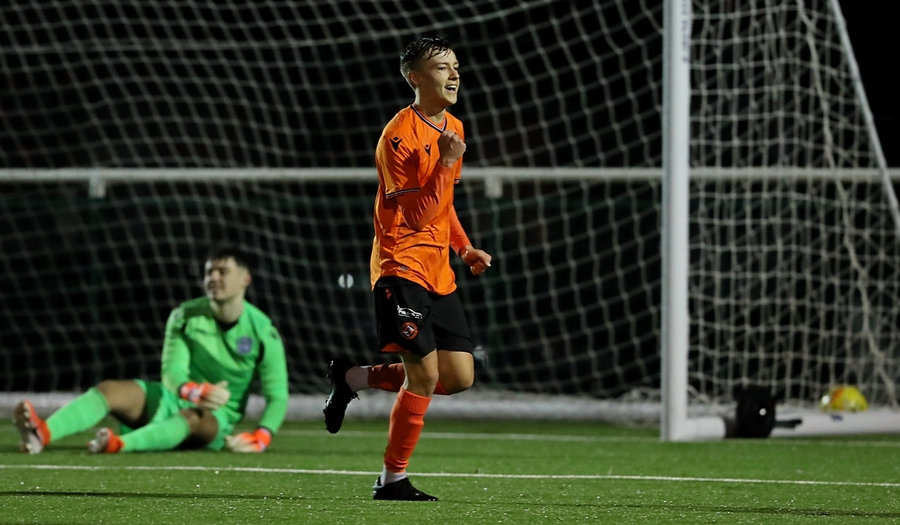 The 2-1 scoreline at the end of this 90 minutes didn't reflect the performance of the Young Terrors as they battled until the final whistle to try and take something from the game after Hibernian had turned things round in the second half.

United were in total control during the opening exchanges of the match, with Shaun Brown shining bright in midfield, and the visitors did well to keep them at bay during the first half-hour. It then came as no surprise when the Young Terrors finally took the lead in the 33rd minute through Archie Meekison.

The 17-year-old has been in fine form this season and added another goal to his tally when he was released into the box by Shaun Brown and fired beyond the outstretched arm of Jay Cantlay.

Hibernian came out fighting in the second half and equalised shortly after the hour mark through a set-piece. Steven Elder picked out Mack Weir at the back post from a corner and the towering defender nodded the ball off the underside of the bar and past Fraser Currid.

Having been the architect for the equaliser, Elder then turned goalscorer in the 67th minute as he knocked the ball over the line to turn the game on his head.

The Young Terrors showed their fighting spirit as they hunted for a late equaliser. In the 82nd minute, Watson fired a low cross into the box which deflected into the path of the onrushing Flynn Duffy. The young left back struck the ball on target with a first time shot, but the keeper managed to parry it wide.

Then a brilliant cross from the right found Fin Malcolm in the six-yard box in the 90th minute, but Cantlay managed to close down the shot quickly. The young Hibernian keeper produced another big save a minute later to once again deny Duffy.

Head Professional Performance Coach Adam Asghar said after the match: "We came in at half-time delighted with the players. I thought we brought the same intensity and aggression that we had brought in the last two games.

"Credit to Hibs they changed their shape second half. We lose two cheap goals which is disappointing but after that you talk about winning mentality, the players showed that in abundance despite not getting the goals we deserved. We had boys flying into tackles, really committed.

"I'm disappointed for the players because they more than deserved the draw, if not the win, with the late flurry of chances through that desire and mentality. They've given us what we have asked for bar a couple of good saves from their goalkeeper and a couple of poor goals conceded from ourselves."

Next up for the Young Terrors is a trip to St Johnstone on December 6 in the Youth Cup with the kick off time still to be confirmed.