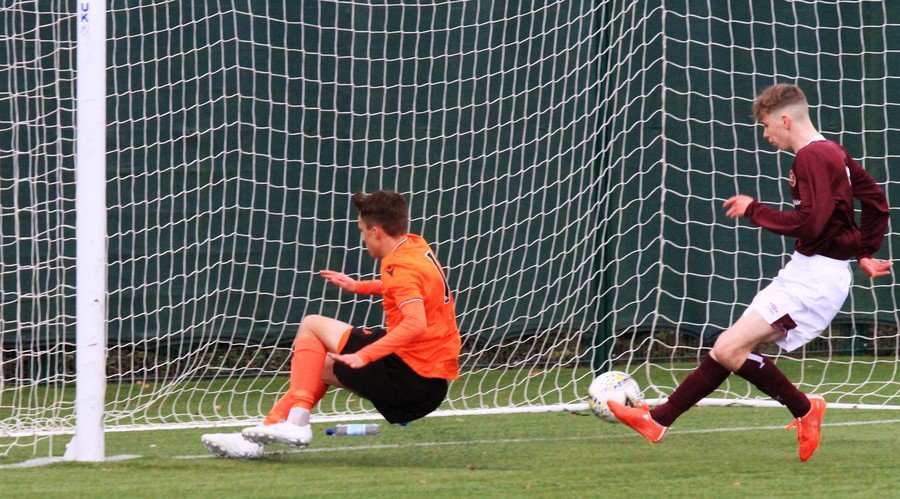 The Young Terrors travelled to Oriam on Friday looking to build on last week's emphatic Youth Cup win v Formartine United, and started the game very well, pressing high against Hearts’ backline, and getting into a great rhythm in the early part of the game and dominating possession in the first two-thirds of the pitch.

As the half progressed, United broke through the Hearts backline with an excellent move. Lewis Neilson stepped in from centre-back and found Shaun Brown in between the lines. Shaun set Lewis Fraser for a one-touch combination to release Darren Watson. Watson’s pace got him in behind Hearts defence and the striker showed great awareness to flash the ball across for Archie Meekison to slide home at the back post for 1-0. A lead well merited.

The Young Terrors would double the lead on 31 minutes. A quick counter-attack found Lewis Fraser in behind the Hearts midfield and this allowed him to pass to Watson who had pulled wide, beat his man all ends up, and hung up a delightful cross for Fraser arriving late to head home off the post and in for 2-0.

Hearts pulled a goal back from a set-piece, however United dominated the ball again throughout the remainder of the game and the excellent performance was capped with the crucial third goal. From a  short corner, Lewis Fraser's delivery was missed by the Hearts Goalkeeper and the aware Lewis Neilson tapped home from 6 yards for 3-1.

After the game, Coach Adam Asghar said, “The players played with a real game intelligence and maturity today which I am delighted with. We had prepared for different tactical situations that may occur and the players were aware enough and accountable to find appropriate solutions to what was required at different points of the game. Our style in possession has really come to fruition in the last few games, and our attacking players are finding great positions to hurt teams. The first two goals scored are something we have tried to improve on - Darren’s movement as a striker can pull him out into wide areas so we need players arriving in the box to score, both Archie and Lewis did that today and got their rewards.”

Next up for the Young Terrors is a home tie versus Hibs this coming Friday with venue and kick off time still to be confirmed.