ROBBIE LOOKS TO THE FUTURE AFTER SIGNING CONTRACT EXTENSION 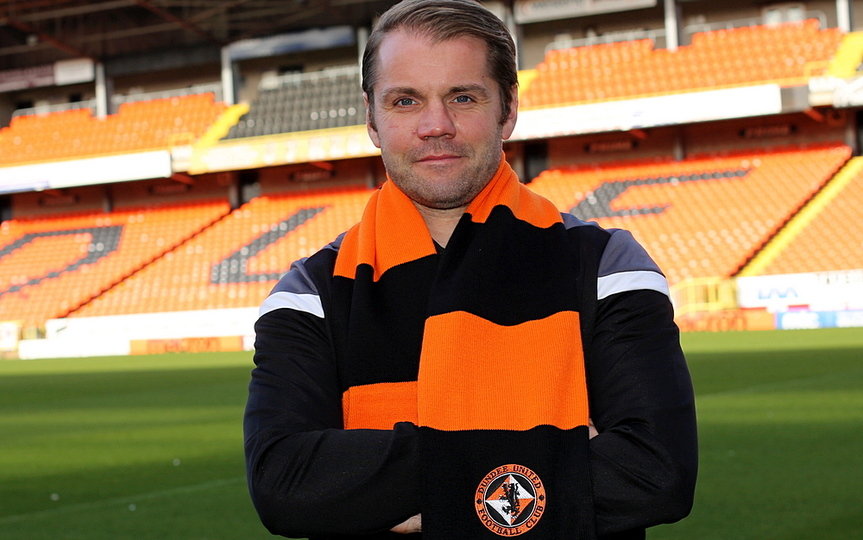 Robbie Neilson believes the "feel-good factor" is back at Dundee United and sees the Club's new long-term vision as the chance to build stability for years to come.

United's Head Coach, along with his assistants Gordon Forrest and Lee McCulloch, signed contract extensions earlier this week which will see them stay at the club until 2022.

Neilson took charge at Tannadice in October 2018, with Forrest and McCulloch joining the coaching staff in January of this year. The trio led United to the Premiership Play-off Final back in May but just missed out on promotion via a penalty shootout. Despite that disappointment, Neilson can feel the positivity flowing throughout Tannadice and believes the club is truly moving in the right direction.

"I'm delighted to commit my future to Dundee United. I think the Club is definitely going forward," said the United boss. "When I came in a year ago it was still a difficult place to come into - there was still a lot of negativity.

"But the new owners, and Sporting Director Tony Asghar, have come in and the whole place is a totally different environment. We know there's still a long way to go but it's an exciting place to be. The whole place has got a feel-good factor again and it's up to us now to try and get the Club back into the top flight where we believe we belong.

"I was here briefly as a player and it is a proper football club. I've been to places before that don't have the history, the fanbase or the demands and expectations. As a manager, you want to come into somewhere that means something to people and it certainly does that here at Dundee United. I've really enjoyed my time here and long may that continue.

"The Club has progressed massively over the last 12 months. I'm pretty sure everyone would agree with that, whether it be on or off the pitch and it's now just a case of making sure we sustain that. Make sure we don't rest on our laurels and keep pushing forward.

"One of the biggest things in football is stability, but one of the downsides of football is there is very little stability in the game. Myself and the coaching staff are getting that stability to try and build here. We've got a long term vision for these young players coming through the academy. Dundee United has a history of bringing players through and it's a great environment for young guys to come into the team."

After the announcement of his contract extension, Neilson reflected on how the Dundee United first team has changed since he took over a year ago. Just three players started the opening league match against Inverness CT this season who also started in Neilson's first game as United Head Coach against Partick Thistle.

Neilson then went on to lay out both his short-term and long-term visions for Dundee United, with promotion just the first step in a larger plan.

"First-and-foremost we have to try and get promoted. We were really disappointed we didn't manage that last year," he said. "After that, it's about trying to sustain ourselves in the Premier League and push up as high as we can. This is a Club which should be in the top six, but there are seven or eight teams in the top flight who say that every year. We know it's going to be very difficult but we believe we now have the infrastructure to help us get there.

"I felt we had to make some changes in the January window to change the culture in the dressing room. But we also made long-term changes by getting guys on longer-term contracts to keep that continuity in the group. Over the last four years, and it happens to a lot of teams in Scottish football, you're changing 15 or 16 players every window and there's no continuity in the group, the culture, the standards, the fans don't get to know the players and this Club is about the fans and the community and everyone pulling together."

But with all that, Neilson began looking ahead to tomorrow's trip to Queen of the South. Due to the international break, it's been a fortnight since the first-team played a competitive fixture but the Head Coach insisted the boys are fired up and ready to go.

United have played well at Palmerston in recent years, with five victories out of our last six league visits. But while Neilson believes we should be going there with confidence, he isn't allowing anybody to get complacent.

"It'll be good to get back playing again - it's a fortnight since we last played! The players are good with a few back from injury which will help bolster the squad," he said. "We're looking forward to it. It's another game, another opportunity to get three points and keep pushing up that league.

"We should be going into every venue full of confidence but we know in this league they are all good teams. There is nowhere we can just turn up to and expect to win. We have to make sure we put 100 per cent in and give that energy back out to the fans."

Cash gates are not in effect at tomorrow's game, but tickets can be purchased outside the away end of the BDS Stand ahead of kick-off.