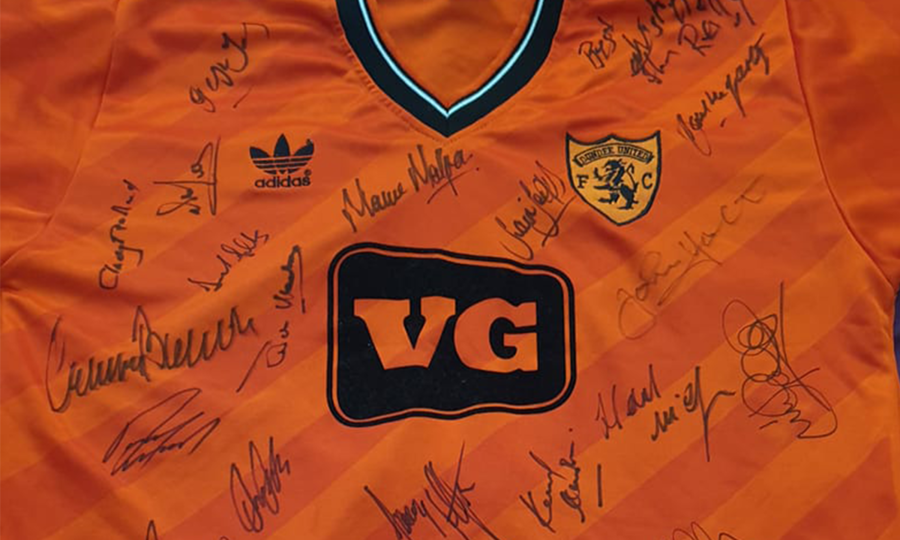 Andy Beveridge is a life long Dundee United supporter and for the last few months has been fundraising for the Scottish Huntington's Association, a leading charity which helps support those affected by Huntington's Disease (HD) through its extensive network of specialist services.

Dundee United prides itself on being a community club, and there is no better use of the word than seeing our fans come together to support one of our own in a charitable cause.

HD is a rare, degenerative brain disorder which affects about one in 5,000 people in Scotland, with symptoms including motor, behavioural and cognitive disturbances. Currently, there are treatments which better the quality of life for those affected by HD by easing some of the symptoms, but there is no way to treat the root causes of the disease completely.

In his efforts to raise money for this wonderful cause, Andy looked to get a top signed by the great Paul Sturrock. The former United player and manager was more than happy to help, but sadly the top was ruined after the pen had leaked while being returned.

As luck would have it, an old 85-87 top was donated to Andy and after contacting the Business Club's Tom Cairns, managed to get it signed by another 15 United legends during our celebration of 50 years in Tangerine at the Inverness game. Andy was then also able to finally add Paul Sturrock's name, along with Sean Dillon, Jon Daly, Eamonn Bannon and Kevin Gallacher.

Paul Sturrock also donated a Player of the Year award he received in 1981 which raised another remarkable £450 with fans paying in the region of £5-£15 for the chance to win. The winner has further shown his generosity by lending the award to Tom to put in a display at Tannadice next year.

The hospitality of the United supporters has helped Andy raise half of his current total of £2400 ahead of his marathon attempt in April 2020.

Everyone at Dundee United Football Club would like to congratulate and thank Andy for all of his fantastic work in his charitable efforts - and full credit to everyone who contributed to the total.