UNDER 18S IMPRESS IN VICTORY 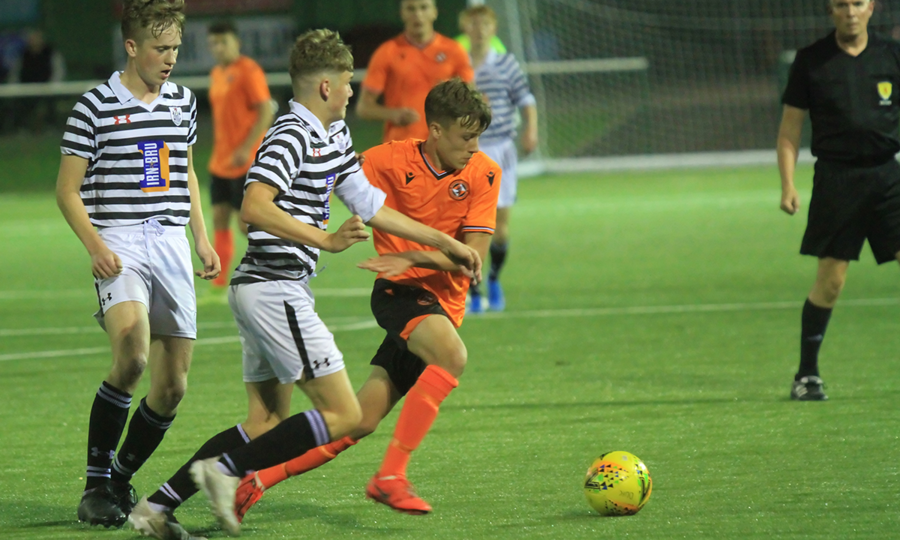 The #YoungTerrors started Friday's visit from Queen's Park with a relentless intensity looking to bounce back after their first defeat of the season to Greenock Morton last Friday.

Starting well, United dominated from early on and got the opener through Darren Watson. Patient build-up play from the back found Captain Lewis Fraser just inside the visitors half, and he clipped an excellent pass over the top to find Watson. The striker showed great strength and composure to finish.

United doubled their advantage shortly after, with more quality passing through Queen's Park from deeper areas. This time the through-ball found Shaun Brown in a pocket of space. He showed great skill to lay off to Lewis Neilson in space. Neilson drove forward and played a smart one-two with Darren Watson before cutting on to his right foot and blasting the ball into the top corner.

United continued to pursue goals and pressurized Queen's Park into giving the ball away 25 yards from their goal line. Watson raced through, and although he saw his left foot effort hit the post, Lewis Fraser was on hand to slot home from close in for United's third.

The second half started more evenly, Queen's Park came out determined to push back into the game as United lost a bit of control. United made changes, and the substitutes all made a positive impact. One such example brought United their fourth goal. Finn Robson provided U16's striker Dom Naglik with a perfectly weighted pass and the tall forward made no mistake poking the ball past the goalkeeper to score his first U18's goal.

Coach Adam Asghar had this to say after the game:

"I'm delighted with the reaction of the players after last Friday's disappointing performance and result. It has been a challenging week in their development as the majority of this group played in Tuesday's reserve fixture also.

"We played with real aggression and were relentless both with and without the ball in the first half, which ultimately killed the game. We still need to demonstrate more control in possession as we provided Queens Park with too much encouragement to get back into the game.

"I was pleased with the younger players stepping up and making an impact. The pathway for boys in younger squads is there for them as proved by Layton Bisland and Fin Malcolm last year. The challenge for them is to dominate at their own age level and then impress when they get an opportunity within the U18's group."