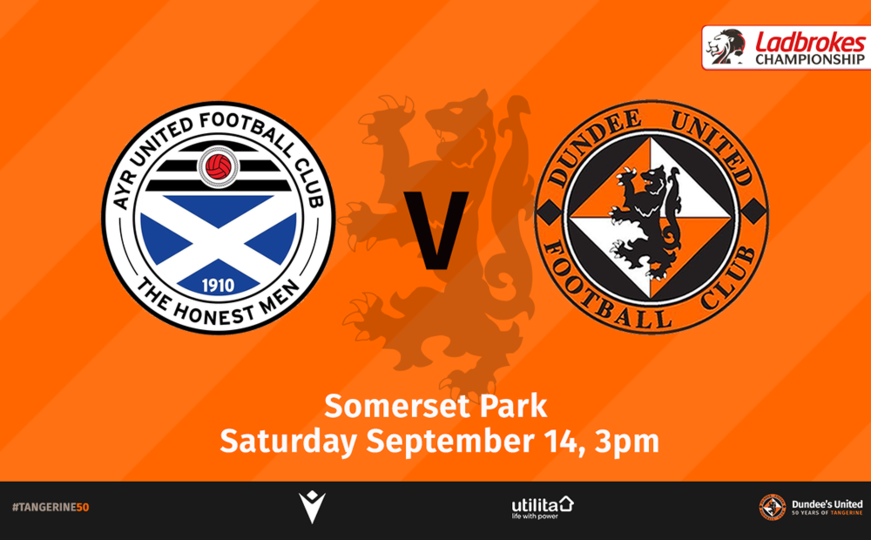 Please note that entry to our match away to Ayr United on Saturday, 14 September 2019 is with ticket purchased online from the Ayr website only. Supporters are urged to purchase in advance to avoid long queues at Somerset Park.

Prices are as follows:

Dundee United supporters will be accommodated in the West Stand and Railway End.

Buses can drop off in Craigie Road, which is past the race course and first left at the lights. Thereafter park at Dampark, which is straight through next lights, first left at roundabout, first right, opposite fire station.

Car parking is available in the Craigie Road car park, which is on the left as you turn onto Craigie Road. Parking for both is free.

Flags and banners are allowed and will be accommodated as long as nothing contentious. They should not be draped over advertising. No surfing flags allowed.

All fans are respectfully requested to conduct themselves in a manner that does not bring the Club and its supporters into disrepute and adhere to the Ground Regulations and refrain from Unacceptable Conduct.

Supporters are advised to remain within the stand and not trespass onto trackside or the field of play.

Searches will be carried out at the turnstiles for any controlled containers and pyrotechnics. Under the Sporting Events Act 1985, being in possession of a pyrotechnic device at a football match, or attempting to bring a pyrotechnic device into a football stadium, is a criminal offence. Any person committing such an offence faces immediate arrest and a life time ban from the Club. Surfing flags are not permitted.

Dundee United would like to thank all supporters for their co-operation and continued backing of the team.