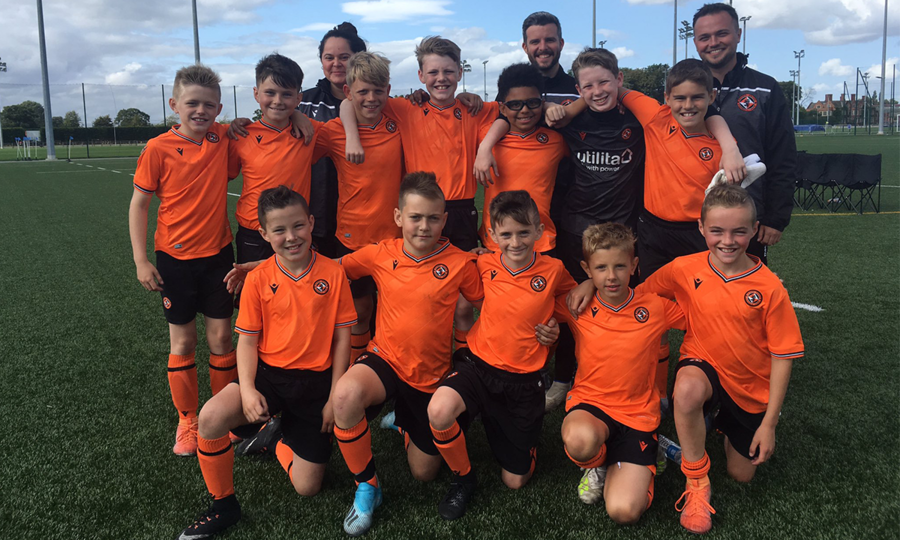 Our DUYDB Additional Games Programme continued this past week with another twenty-four of our Academy players earning the opportunity to represent the Club at the IDA International Cup at Queen Ethelberga's Collegiate in York.

First up was our Under 8/9s who travelled to York on Friday 9th August to compete against teams such as Derby County, Middlesbrough, Sunderland, Leeds United, Wigan Athletic and Hull City. This was the boys' first taste of tournament football with the Club, and they relished the opportunity of testing themselves against their peers south of the border. The challenge of playing against older, more physical opposition was one they faced head-on and performed well throughout the day, particularly in the games against Derby County and Sunderland. At seven and eight years old, the boys also got their first taste of a penalty shootout in the tangerine shirt and were delighted to come out on top.

The following weekend saw our U11/12s head south for their tournament with the boys up against Burton Albion, Sunderland, Middlesbrough, Doncaster Rovers amongst others in the Group Stage of the competition. Despite a languid start in which they only picked up one point from their opening two games, the boys found their rhythm against Burton Albion in game three and performed to the level that their coaches have come to expect.

They continued in this manner throughout the rest of the day beating Sunderland and Middlesbrough along the way and finishing off the group stage with fourteen points from a possible twenty-one having lost just one game and keeping six clean sheets out of seven games.

The above total was enough to safely guarantee the boys a place in the Champions Round the following day where they were giving a difficult draw against Darlington, Leeds United and Sheffield United -who had all impressed on day one.

With the boys now in their stride, they came out the traps flying with an impressive performance and result v Darlington to register three points on the board. Next up was Sheffield United who had already drawn 0-0 with Leeds United in their opening game leaving us within three points of automatic qualification. It proved to be another closely fought contest with both teams having dominant periods and chances throughout the match but neither able to break the deadlock during the 16 minutes. A convincing Leeds United win over Darlington left the boys needing a positive result in their final group stage game to ensure their progress from the group. Brodie Lee broke the deadlock for us with a beautiful half volley on the turn but as we pressed to add another Leeds broke away to equalise with an impressive solo effort.

With the game finishing 1-1 it left both teams on five points but Leeds with the superior goal difference, therefore, the boys had to wait to see how Sheffield United got on vs Darlington in their last group game. Thankfully, with three teams finishing on five points, they progressed to the quarter-finals on goals scored and were drawn against tournament favourites Middlesbrough.

The boys grabbed an early lead through an excellent Kobe Mitchell finish into the top corner however they were pegged back towards the end from a set-piece, and the game went to penalties. Three penalties for each team but it ended in heartbreak for the boys as they went down 3-2 and fell into the 5th-8th place competition.

A comfortable Semi-Final saw them progress to the 5th/6th playoff where they, once again, faced Leeds United. They headed into the game having only lost one game all weekend with ten clean sheets and only conceding four goals in twelve games but still had enough in the tank to put on an impressive performance to finish the tournament off with another win – Kobe Mitchell with the all-important goal again. It was just rewards, and the least the boys deserved having performed so well throughout the two days with many of our opponents south of the border commenting how impressed they were with the boys' performances.

It was another valuable learning experience for all players and staff involved over the two age groups with the Dundee United Youth Development Board again providing the funds to support the Additional Games Programme.

Academy Director, Andy Goldie said: "The past two weekends have again reinforced my belief that we have the players and staff within our Academy who can take our style of play anywhere and compete against top clubs in England and further afield.

"Both tournaments have been a resounding success with great thanks once again to the Youth Development Board, the organisers at the IDA International Cup and our Academy parents who were fantastic support over both tournaments. Tournaments such as this and those throughout our Additional Games Programme are of massive benefit to both our players and staff and certainly help accelerate the development of both.

"The boys who have represented the Club over the past two weekends have done so with real pride, and it has been a real joy to watch them stamp Our Identity against top opposition in a competitive format.

"As we continue to grow the Additional Games Programme, our players and staff will benefit greatly from opportunities against an even better quality of opposition, and therefore it is important the backing we receive from the Youth Development Board is recognised by all our supporters. We are working extremely hard behind the scenes to develop a quality of player our fans can be proud of and celebrate again, and opportunities such as these most certainly help us in achieving Our Vision."