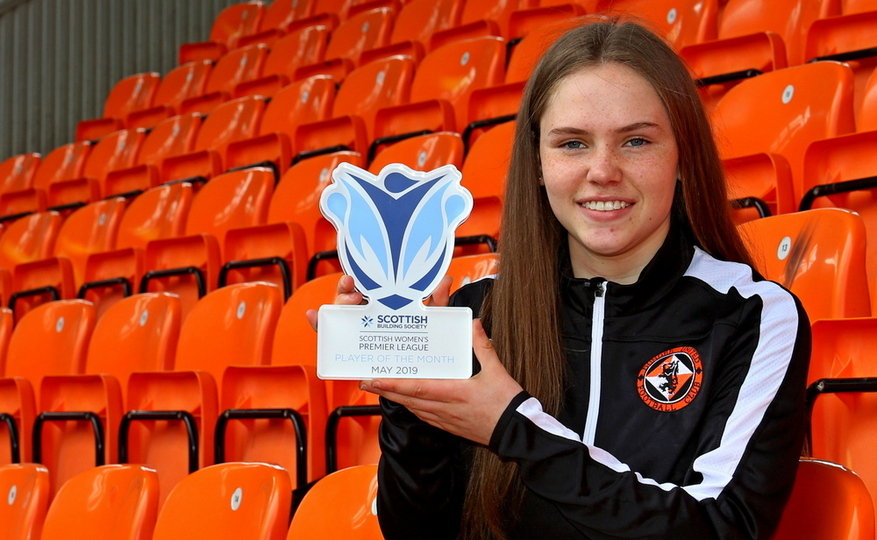 Dundee United's Neve Guthrie has won the Scottish Building Society SWPL Player of the Month for May 2019.

Neve secured the title by winning over 50% of the public vote alongside players from Rangers, FC Kilmarnock and Hibernian.

The 16-year-old striker has scored six goals so far this season in 12 matches including the winner in a 1-0 win at Tynecastle in front of a substantial home support in one of the highest profile matches of the SWPL2 campaign.

Neve joined United from Dryburgh Athletic in the summer of 2018 and also scored seven goals in the final six matches of the season as United secured the title. With four Under 16 international caps to her name already, Neve has now set her sights on continuing her development at United and making her way into Scotland's Under 17 squad.

Neve spoke to Dundee United's youtube account after receiving her award and said, "It is a fantastic feeling to win it, the standard is so high, so it is unbelievable to have won it.

"I always try my best, and I have scored a few goals, and it is great to get noticed. To have won the public vote is such a confidence boost. We are doing well in a league of a high standard, and we are showing we can compete against some established teams.

"I want to become a professional footballer, so I need to keep working hard and try to stand out from the crowd. The possibility of playing for Scotland at a World Cup in four years is a goal for me to try and achieve and I can only do that if I keep giving my all for Dundee United."

Director David Dorward added on behalf of the Community Trust:  We are absolutely delighted for Neve.  Since launching DUWFC, the Community Trust has continued to be impressed with and proud of the progress made by these inspirational footballers. This is a fine example to young girls and women that hard work and dedication pays off and there’s no doubt that Neve is a real role model for young players.  Well done Neve.”