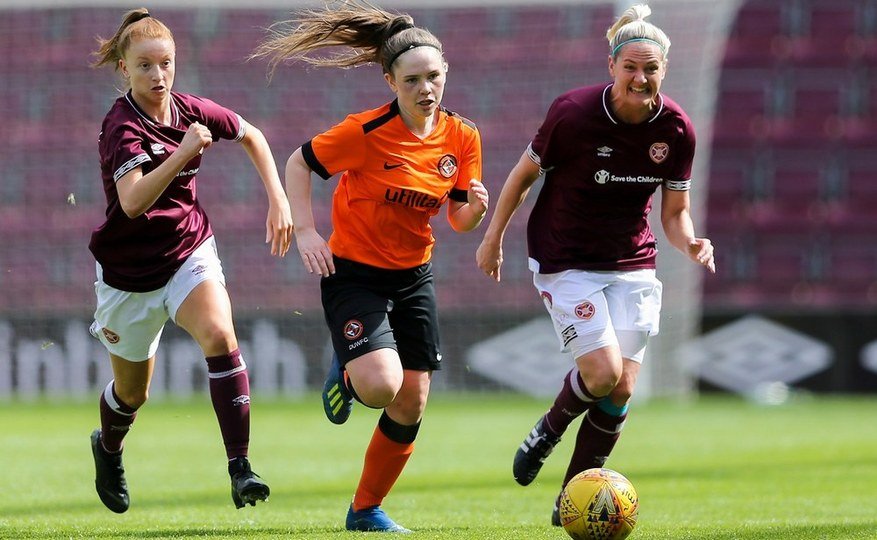 Dundee United WFC’s Neve Guthrie has been nominated for the May 2019 edition of the Scottish Building Society SWPL Player of the Month.  Voting is now open and you can vote for Neve at www.scottishbs.co.uk/swpl/potm.

Neve, 16, joined DUWFC in Summer 2018 from Dryburgh Athletic and quickly became a key part of the side that gained promotion to the SWPL.  A Scottish youth international, Neve attends the Scottish FA JD Performance School at St John’s High School and has been in terrific form recently.

Neve scored the only goal of the match, is possibly the highest profile league match of the 2019 SWPL season, when DUWFC beat Hearts 1-0 at Tynecastle Park.  Neve also scored the winner when DUWFC came from behind to win the Tayside derby against St Johnstone 2-1.

Neve has now scored six league goals this season, including a hat trick in a 9-0 victory over Hutchison Vale and the only goal in a 1-0 victory over Hearts at the GA Arena earlier in the campaign.

Dundee United WFC Head Coach, Gavin Beith, said: “Neve being nominated for this award is due recognition for the commitment and effort she shows on a daily basis to be the best she can be.  The 16-year-old has started every game so far this season and has scored some vital goals, including the winner at Tynecastle v Hearts in May.  Her overall game has been very consistent and helped the team have a positive first half of the season.”

Voting for Player of the Month is now open to the public and you can vote for Neve at www.scottishbs.co.uk/swpl/potm.  Voting closes at 12 noon on Friday 14 June and the winner will be announced on Monday 17 June.